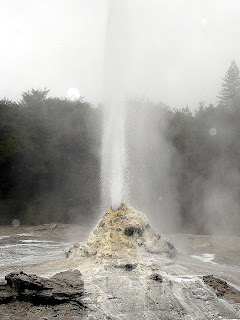 Rotorua is the thermal capital of New Zealand. Geyser's and bubbling mud pools are plentiful. This particular geyser gets a helping hand every morning at 10.15am ! Heights of up to 20 metres can be seen and it can continue to erupt for up to an hour ! In 1901 the first open prison in New Zealand was established at Waiotapu, its object was to accommodate some of the better behaved prisoners from around the jails of the Rotorua Lakes District. It was a gang of these prisoners that first discovered the clearing in which the geyser is situated and that the bubbling hot water spring could be made to 'erupt' by adding soap. A fact discovered when they first used the hot water to clean their clothes in ! Rocks were subsequently placed around the base of the spring to enhance the eruption and over the years silica from the eruptions has built up to give a white cone shaped appearance.

Alex
Cheltenham, Gloucestershire, United Kingdom
Hi, I'm Alex. Welcome to my blog ! Many of the photographs on display here were taken in New Zealand (and more recently - Hong Kong), but I reserve the right to display other photographs too. I've been visiting New Zealand regularly since 1994. In 2005 I undertook a digital photography course at AUT (Auckland University). I felt so inspired during (and after) this course that I decided to go out and capture the places I love in a way that made sense to me. Most of the pictures on this site were taken in wild unspoiled places where the only force that counts is nature! I'm very happy to say a number of my photographs have been published in 'Journeys', a travel magazine for the travel connoisseur available in WHSmith's and other fine retail establishments. I hope you like at least some of the photographs on display here. If you'd like to purchase some of my photographs, a selection of gift cards and mounted prints are available to buy at www.ahfineartphotography.com Please remember to return on a regular basis as this site will be updated often ! Thank you for taking a look at my site, Alex.